Just the way I want it... (customising my bicycle)

One of the charms of having and using a bicycle, for me at least, lies in the ability to customise my bike- to experiment with it, to get it looking, and working, just the way I want it, to fit my needs. It helps that bicycle components cost far less than car components do; a makeover that would cost you thousands of dollars to do for your car will cost hundreds or tens to do for a bicycle. The culture of bicycling, as opposed to automotive culture, also helps. Where automobile customisation sometimes seems designed to cater to young men with far too much money and testosterone, the culture of bicycle customisation seems oriented towards people solving practical problems, and doing it without spending much money. 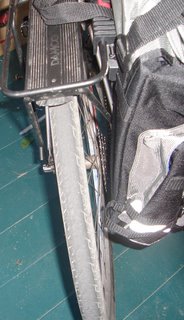 I use my bicycle to go shopping quite a lot, and I have hopes of using it for longer trips outside Toronto, so I wanted storage capacity on the bicycle. Accordingly, I have front and rear panniers.

The rear panniers have many excellent features, including a 56-litre capacity, but my bike has a high, narrow rear deck; it also has a bar that I can only clip to in the rear. As a result, the bags hang toward the back, which means that when I loaded them groceries, gravity tended to pull them into the wheels. Clearly, I needed a bracket to hold the pannier better. 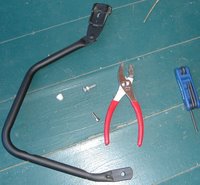 I solved that problem by going to a local bike shop, where I acquired a two bars that had once supported a child bike seat (see photo to the left). I then bolted the bottom of these brackets to the frame, and clamped the top to the rear carrier (see photo at right).

As you can see from the photograph on the left, the brackets to the rear of the bicycle now hold the panniers quite firmly away from the wheel. As a bonus, they also support rear reflectors, which help keep my bike legal, and safe. 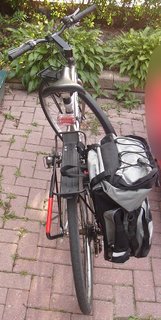 Posted by Anonymous at 7:55 PM