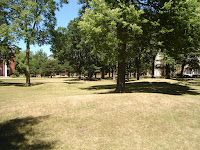 We set ourselves a challenge yesterday: swimming, blogging, sightseeing, and getting from the edge of southern Wisconsin to the borders of South Dakota. By Mapquest's account, it should take eight hours to drive that distance, but MapQuest does not take construction delays, rainstorms, or meal breaks into account.
We started out looking at Native effigy mounds at Beloit College, a small liberal arts university. The mounds at Beloit look like small humps, clearly visible as human constructions, rising between two and four feet above ground level. The brochure provided by the college anthropology museum tells us they date from AD 800-1000, and surmises that Native families built them as projects to foster family unity. Beloit College has added some modern sculptural installations to the grounds as well, including a tribute to Emma Goldman. It consists of a seat with a cage in front of it, and an open liberating window to the left. 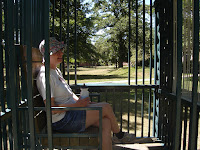 We had lunch in Beloit, then drove north and west, past Madison to the Mississippi crossing that divides Wisconsin from Minnesota. The Mississippi has cut a large valley here, with impressive bluffs looming over it. According to the historical plaque, the area has attracted tourists since 1855. The highway follows the valley for a short while, then climbs out into rolling farmland of Minnesota. We stopped for dinner in Rochester, which appeared to have a balloon festival under way.
After dinner, we drove on in the dark; rain turned the drive into a challenge at first, then an endurance test. We arrived after midnight.
Today we pick up our co-worker and travel on to the meeting in Rapid City.
Posted by Anonymous at 8:28 AM

Email ThisBlogThis!Share to TwitterShare to FacebookShare to Pinterest
Labels: Travel