These days, they come for the dictionary first... 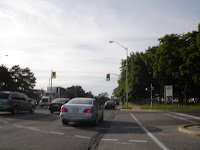 Joe at Biking Toronto wants to ditch the word cyclist, and at first sight he seems to have a good argument. Goodness knows, with both the friends and enemies of cycling engaged in a demented race to pile more and more baggage onto this poor two syllable word, it should make sense to just chuck it and start over. Look at all of the attempts to define a cyclist: someone who wants to save the planet but won't bother to stop at traffic lights, an impoverished elitist, an altruistic member of a self-interested minority. Can we save this word? Do we want to save this word?

Speaking for myself, yes I do want to save the word cyclist. I want to cut the straps and let all the baggage fall off, but I want to keep the word. A cyclist can vote BQ, Conservative, Liberal , NDP, or Rhinoceros. A cyclist can obey all the laws with great care, or can proceed through the world making up his or her own laws. A cyclist can believe in capitalism, anarcho-syndicalism, or any other economic system; in representative democracy or absolute monarchy. A cyclist can love the planet, hate it, or believe it doesn't matter because the world will end next Tuesday. Only one thing makes a cyclist: the use of human-powered, wheeled transportation. Anyone who has used a bike reasonably recently can call themselves a cyclist.

The word "cyclist" describes those of us who ride bicycles with an elegance and brevity that the words "people who happen to ride bicycles" will never achieve; but I have two more basic reasons for not wanting to give up the word. 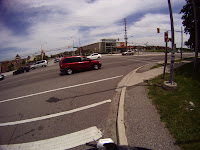 First, to the noisy minority that shows up in newspaper and blog comments after every story involving cyclists and whips themselves into a froth (and they do constitute a minority), the problem has nothing to do with words. I do not know what many of those people really object to, but they focus their venom on human-powered vehicles and those who ride them. Just as advocates for people with cognitive impairments gave up the word idiot, imbecile and retarded when these words each evolved from a medical diagnosis into a schoolyard taunt, if we start calling ourselves people who happen to ride bicycles, we'll start to read abuse directed against PWHTRBs. These days, before they come for the communists or the trade unionists, they come for the dictionary. Let us not kid ourselves: the ultimate target has nothing to do with the words we use, or even the actual technology that moves us. They want our freedom. 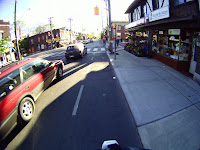 This brings me to my second point. Some years ago, on a visit to the ancient seaport of Marseilles, I encountered a young street tough who asked me for money. When I had none to give him, he snarled "Juif". What should I have told him? The truth? Je ne suis pas un Juif would hardly have sounded dignified. In the end, I had no good (verbal) answer for him and just treated his comment as a stink in the air, not worth acknowledging. The point for us: when someone attacks us, it may seem to make sense to separate ourselves from the kind of people we think our accusers must really dislike. But that kind of denial preserves neither our dignity nor our rights. If we propose to drop the word cyclist as a way to distance ourselves from those dirty lawbreaking anarchists, we might as well forget it and preserve our dignity.Maybe I see myself as better than cyclists who ride badly, arrogantly or confrontationally; maybe I don't. But to many of our opponents, just riding a bike makes me just the same as all the cyclists they criticize. Maybe we need to debunk their stereotypes, but we sure shouldn't surrender to them.
Posted by John Spragge at 5:48 AM