How not to argue for the rights of cyclists 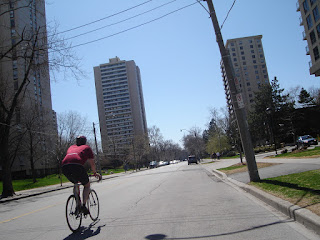 When cycling on streets and roads where motorists may have permission to operate their vehicles, cyclists have the right to decide our lane positions for ourselves. Human vision has a narrow acute range: the optimum resolution of our eyes covers just a few degrees. To cope with this limit, aviators train to scan the sky in small sections; without this training, surface motor vehicle operators focus on the road in front of the vehicle. Cyclists occupying the center of the lane have the best chance motorists will see and avoid us. Visibility plays a particularly critical role at intersections, and there cyclists riding to the side have the greatest chance of coming into conflict with motor vehicles.

There you have the safety case for cyclists riding in the center of the lane. It exists in tension with another safety imperative: separating traffic operating at different speeds, to avoid the need for sudden changes in speed and to minimize the consequences of an impact. Those two hazards: getting sideswiped by a driver passing too close and getting hit by a driver who sees us too late define the choices for cyclists. Taking all the risks and the known limits of drivers into account, it makes a lot of sense for cyclists to ride in the center of the lane when we don't have, at minimum, an adequate bicycle lane, and, preferably, a protected bike lane. Most of us who ride in North America can't count on bike lanes every where we go, or even most of the places we go. Most of us need to take the lane, and taking the lane serves us best when we do it without fear and without apology. At an absolute minimum, cyclists have, and ought to vigorously defend, a right to make our own choices about where in the lane to ride.


I ride in the center of the lane because I consider it safer. That covers it in three words: I consider it safer. John Forester and some of his supporters clutter the issue with irrelevant and frankly offensive detours from the single objective that matters: getting everyone from point 'A' to point 'B' alive and uninjured, notwithstanding the presence of two-tonne steel bombs.

Recently, the Los Angeles Times published a story claiming Mr. Forester's arguments for cyclist using roads and only roads had lost its relevance, and that most cities had rejected his proposals in favour of protected bike lanes. In a riposte to this piece, a writer in  the blog Cycling in the South Bay quotes what he calls "diamond hard" prose by Mr. Forester:


...making sure that black people have the same legal rights as white people cannot, justly, be held to be pitting blacks against whites. Besides, the only cycling alternative to advocating legal equality was accepting Motordom’s motorist supremacy policy and its Jim Crow laws that demeaned cyclists. 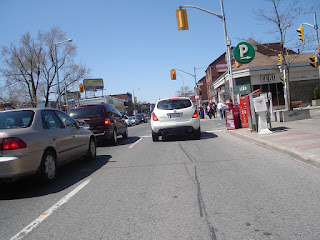 Um... no. Equating cyclists to a persecuted minority does not pass any reasonable test. When Mr. Forester figures out how African Americans can take the melanin in their skin and the four centuries of abuse, dispossession, and exploitation in their history, and lock it to a pole, then he can talk about cyclists as victims of the kind of persecution African Americans face. Until then, the analogy doesn't hold. If anything, it obscures, in an offensive manner, the way relatively privileged men, men mostly identified as white, tend to dominate cycling and cycling advocacy.

Mr. Forester uses too much ego-laden terminology, speaking not in terms of practical safety but in terms of superiority versus inferiority:

At all times (with maybe some insignificant exception) cyclists were legally inferior to motorists and instructed to be subservient to them.

Almost all vehicles put the operator on the side of the vehicle toward the on-coming traffic. As a result, drivers have better sight lines for merging into higher-speed traffic on the side toward the center lane. That means, in turn, that on any multi-lane road, traffic moves  more safely when the faster traffic drives in the center lane and the slower traffic drives toward the side of the road. That simple fact, not any sense of superiority or inferiority, determines lane allocations.

I frequently deal with road users who let their egos do the steering, and who seem to consider greater speed and lesser respect an achievement of some sort. Rather than cater to this perception, cyclists should reject it out of hand. Keeping motor vehicles out of facilities designed for cycling no more signals cyclist "inferiority" than forbidding smoking indoors signals the "subservience" of non-smokers.

In fact, Mr. Forester's writing takes the deeper values of a machine-oriented culture for granted. In this, he actually endorses the essential claims of a motoring-oriented culture. Consider his argument against bicycle lanes:


It is correct that the bikeway funding by American governments is now also supported by bicycle advocates in a program designed to accommodate fearful, traffic-incompetent, rules of the road rejecting cyclists with only the maturity of an untrained eight-year-old. 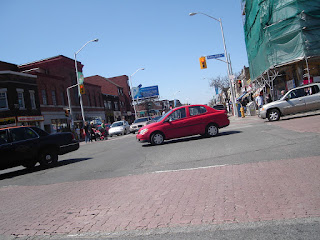 Mr. Forester's argument assumes the machines rightly set the pace.  With the automobile, we have created an urban environment where people with cognitive or neurological or even physical issues have their mobility severely restricted. That isn't a feature; it's a bug. Our streets ought to allow the greatest possible mobility to people with limits: limits to what they can physically do, limits to what they can realistically understand. And the least of people, the least in physical ability and understanding should take precedence over the machine. If a protected bike lane allows mobility for residents of a l'Arche community, that is a good thing, not a problem. Cycling should not be an acute test of mastery, except for the few who want it to be.

Anyone who want to take the lane should have the right to. We should have to make no arguments beyond our desire and our perception that riding center lane makes us safer. John Forester has made those arguments as well as anyone and better than most. I recommend cycling advocates drop the irrelevant and ego-laden arguments. Making our infrastructure safe for everyone presents enough of a challenge.

"Equating cyclists to a persecuted minority does not pass any reasonable test."

I would agree with Principled Pragmatist if John Foster had not also written, in the same paragraph: "...Motordom’s motorist supremacy policy and its Jim Crow laws that demeaned cyclists...." That quote quite clearly equates the enforcement of white supremacy enforced by Jim Crow laws with "motorist supremacy. That I regard as inappropriate. Cycling, however justified, however valuable, however good for the infdividual and community, still constitutes a behaviour and a choice. You cannot equate that to an intrinsic part of a person such as skin colour, disability, sexual orientation, gender expression, or age.