An inadvertent Faustian bargain for cyclists? 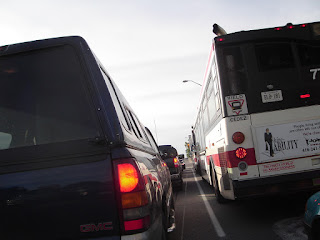 The Ontario Highway Traffic Act says that cyclists have to ride in the right hand lane, but does not specify a position. It also requires motorists to pass cyclists with at least a meter of clearance. At the same time, it says that when passed, cyclists must move over and allow the overtaking vehicle to proceed. The law makes it unclear whether the cyclists must, as another part of the section on passing states, leave no more than half the road free, or whether the cyclist must move over regardless.

In the United States, the Uniform Vehicle Code, published by the National Committee on Uniform Traffic Laws and Ordinances in 2000, says the following:


(a) Any person operating a bicycle... at less than the normal speed of traffic... shall ride as close as practicable to the right-hand curb or edge of the roadway except.... When overtaking and passing another bicycle or vehicle.... When preparing for a left turn.... When reasonably necessary to avoid conditions' including but not limited to: fixed or moving objects; parked or moving vehicles; bicycles; pedestrians; animals; surface hazards; or.... a lane that is too narrow for a bicycle and a motor vehicle to travel safely side by side..... When riding in the right-turn-only lane.

In both cases, the law manages to say the bicycles should ride in the right hand lane and ride, or give way, to the right side of the road, except when they shouldn't. Conversely, cyclists can take the lane, when allowed to, under certain conditions.

For the past three decades, laws, practices and attitudes have evolved under pressure from environmentalists and cyclists. For much of that time, various people with an emotional or an economic stake in the current heavily motorized transportation system have attempted to resist this process. Laws in the process of change inevitably contain contradictory and unclear segments, as the legislature changes laws piecemeal. 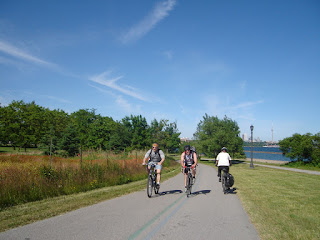 As different legislatures change laws differently, it makes sense to expect the laws will evolve differently. In this case, the laws in very different jurisdictions have changed to the same effect: they all acknowledge the right of cyclists to take the lane where safety requires it, but they do so ambiguously. In all cases the application of the law depends on a judgement; in the case of the Ontario law, it requires a judgement about what the law means.In the case of the Uniform Vehicle code, a cyclists's right to take the lane depends on whether conditions require it; again, a matter of assessment.

The laws in Ontario and elsewhere have taken a particular shape: articulate cyclists with considerable personal resources, of the sort who tend to lead legislative campaigns, can take the lane with some confidence the courts will uphold, or at least permit, their actions. Meanwhile, the laws retain enough ambiguity to permit the police to push cyclists without the resources or time to study the law or prevail in court to the side of the road. I do not consider this a compromise cyclists should or can accept. As long as cyclists' right to ride in safety remains subject to ambiguities in the law, then some of us do not have the right to take the lane, which means none of us really do.

At a minimum, this means we haven't won the battle for the right to cycle, safely, and to choose the best road position. We need to say so. We need to keep pushing governments to remove all the qualifications in the law regarding our right to the road.
Posted by John Spragge at 5:21 AM

Very good analysis. In Alberta, as many other jurisdictions, we're required under the Highway Traffic Act to ride to ride as far to the right as practicable: "A person who is operating a cycle, other than a motor cycle, on a highway shall operate the cycle as near as practicable to the right curb or edge of the roadway unless that person is in the process of making a left turn with the cycle."

So only a left turn exception; not even exceptions for roadway quality, obstructions, etc etc. Why aren't cycling advocacy groups across Canada working to remove these stipulations?