But today at noon the cancer won. Peaches's joyful spirit never faltered, and our love for her never wavered, but we both ran out of time. We took her to the vet yesterday because the chemo-therapy made her throw up. Today we found her listless and unable to eat; at noon she went into convulsions, and before we could reach the vet she died in my daughter's arms. 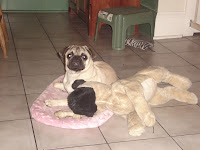 This is a beautiful goodbye tribute to Peaches. In reading this, I thought about all the pets and animals I have known in my life, who have given such joy.