Thinking About the Rule of Law

When Rudolph Giuliani called for a "trial by combat" on January 6, his hearers probably did not envision the ancient Germanic judicial ritual. Indeed, to judge from the number of supporters of the "Q" conspiracy theory attending the rally where he spoke, his call for "trial by combat" probably evoked, in at least some of his hearers, an imagined reckoning which, had it taken place, would have resembled the baptismal scene in "The Godfather", with Donald Trump reciting the oath of office as his surrogates systematically slaughtered his enemies. This displays a profound detachment from the rule of law; paradoxically, it also illustrates the importance of the rule of law. The Godfather movies chronicle the profound tragedy of a man drawn into a corrupt and violent system despite his intentions, and the baptism scene in that movie vividly illustrates, in its hypocrisy, the corruption behind the violence. To imagine a similar scene as a triumphant vindication, as the believers in "Q" appear to have done, with Donald Trump beginning his second term with a mass hanging following a military coup and unlawful tribunals represents a catastrophic corruption of the American imagination.

Read more »
Posted by John Spragge at 2:32 AM No comments: 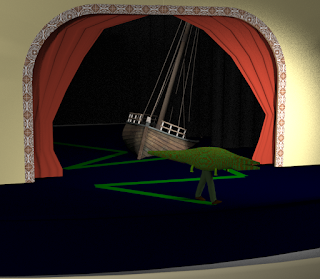 Many years ago I heard a theatre legend, one of many such stories, in which a young and cocky actor playing the crocodile in Peter Pan managed to infuriate the stagehands. In crocodile costume, of course, he walked bent over, following tape on the stage, and one night, after a particularly egregious offence against the stage crew, he followed the tape, tick tocking away... straight into the orchestra pit.

The usual message for this story for actors is: don't piss off the stage crew. It also has a message for politicians and pundits: don't blindly follow the tape. In politics, of course, the tape we follow has many names and takes many forms: peer pressure, compromise or the allure of power. More dangerously, the tape we follow takes the shape of a phenomenon visible throughout politics and society: a series of minor propositions, each of which we may not want to agree to, but which at the time seem less painful than a sense of letting the team down, or losing friends, access, and influence. C. S. Lewis described this process in his great essay The Inner Ring.

Read more »
Posted by John Spragge at 7:34 PM No comments:

At two thirty-seven in the afternoon of April 23, 2018, Alek Minassian drove a rented van down a crowded sidewalk in Toronto, killing ten people and injuring sixteen others. According to social media posts retrieved after the event, he announced his crime in the following words:

Private (Recruit) Minassian Infantry 00010, wishing to speak to Sgt 4chan please. C23249161. The Incel Rebellion has already begun! We will overthrow all the Chads and Stacys! All hail the Supreme Gentleman Elliot Rodger!

We still do not know the exact relationship between Alek Minassian and the so-called "incel" movement. In the initial social media statement and subsequent interviews, he has claimed membership in what he, at least, appears to have considered a movement. His own claims to have a connection with the internet users who call themselves "incels" played some role in his criminal defence, but if any members of the "incel" movement have claimed him, the media appears not to have reported it.

Alek Minassian's lawyers claim his autism has distorted his thinking so severely he could not understand running people  over with a van was wrong. This claim appalls most advocates for people with autism; it paints people already burdened by misunderstanding and hostility as a lethal threat. In a sense, though, the legal case matters less than the question of why Alek Minassian found the online snarls from the fever swamps of the Internet compelling. Whatever the judge in Alek Minassian's murder trial decides in a month's time, he can expect years if not decades in secure custody, the ten people he killed by running them over with a van will still be dead, and the sixteen people he injured will still have to live with varying degrees of trauma. The malignant whispers from the corners of the Internet will persist as well, ready to delude and snare the unwary. This tragedy has taught us the dangers of those whispers. It makes sense to ask if we can answer them.

Living not by lies but ignoring the truth

Reverend Dwight Longenecker has reviewed Rod Dreher's new book "Live Not by Lies", and his review essay is interesting. In fact, I would go so far as to call it fascinating: it brings to my mind an essay by Connor Cruise O'Brien called "What can become of South Africa?", in which he speaks of the potential of ideological rhetoric to "boggle the mind" and completely drive out ordinary, humble respect for everyday reality. Reading Fr. Longenecker's essay, I can't tell whether he actually does not see the contradictions in his writing, or whether he simply wants to know if his readers have paid attention, because he wrote the following paragraph in his glowing review of Mr. Dreher's book:

No matter what you believe about the legality of Joe Biden’s election, the fact remains that half the country believe Donald Trump and his Trump army were planning a coup. The other half of the country believe Joe Biden accomplished a coup through a rigged election. Again, no matter what the facts are–the result is that the Joe Biden presidency appears to be propped up by military might. Calling up 25,000 troops to Washington this week was not just for “security”. It was clearly a show of strength by the winning side. It was a display of military might to remind the other half of America who won and who is in charge.

In case anyone has forgotten, one of the books praised in this review essay bears the title "Live Not by Lies". That context makes the above quote from the article quite remarkable.

Read more »
Posted by John Spragge at 8:28 PM No comments:

I begin to write this in the last few minutes of January 20, 2021. I will probably publish it in the first hours of January 21, which, among some other distinctions, marks the first full day of the Biden-Harris administration. TV news has shown President Biden swearing in new officials of his administration, with an admonition similar to Churchill's famous "blood toil tears and sweat", and a single, uncompromising requirement: he required all his appointees to always show respect for their colleagues and the American people.

At the same time, the officials, strategists, functionaries and hangers on of the previous administration have departed Washington, one or two clutching freshly printed presidential pardons, others just leaving. As Americans celebrate a hard-won transfer of power, in the last minutes of this day I want to celebrate the departure of a man who left Washington over two years ago, and now lives in well earned obscurity, his attempt at a political comeback denied by Donald Trump for precisely the wrong reasons. That man, Jefferson Sessions, implemented the most egregiously cruel of all the policies of the Trump administration, the policy of family separation at the American border with Mexico.

Read more »
Posted by John Spragge at 1:26 AM No comments:

As I write this, Joe Biden prepares to take the oath of office as president of the United States. He now has an opportunity: to move American politics in a new and humane direction. He also has a series of challenges: a republic fractured, with at least some bitter end fans of the previous chief executive who will not accept him as their president, and who have made no secret of their propensity for violence. He has to lead his country through the worst months of a pandemic, made far worse by the blundering, posturing, and dishonesty of his predecessor. He has to deal with a historic deficit and a government burdened by over seven trillion dollars more debt than it carried when he left at the end of his terms as vice president. He, his government, and the American people also face the task of weaning the American economy off the twin narcotics of easy money and fossil fuels.

I wish him well.

Posted by John Spragge at 11:55 AM No comments:

Laying down a marker

Imagine a miracle. Someone with the power to do so takes every Trump supporter through the voting systems of American democracy. They examine every contested state, every urban precinct, every ballot, voting machine, line of code, signature and mailer envelope. All the millions who came to his rallies, sent in their money, or voted for the man and his enablers, get to see in detail how the voters recorded their choices, how the poll workers counted them, and how the tallies and the counts and recounts worked.

Let us assume this examination would reveal exactly what the  Election Infrastructure Government Coordinating Council has said of the election as a whole. Let us assume it confirms what Georgia Secretary of State Brad Raffensperger has told the world about the Georgia election and its associated recounts, and what the Michigan, Pennsylvania, and Arizona government officials had to say. Assume our imaginary audit shows each Trump supporter why American state and federal courts have rejected thirty-eight lawsuits by the Trump campaign and layers aligned with him.

Read more »
Posted by John Spragge at 5:52 PM No comments: