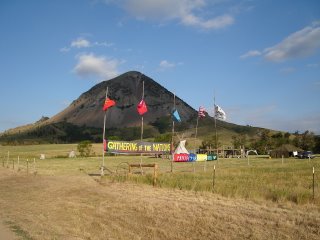 I have spent the past month in the northern edges of the spectacular Black Hills of South Dakota, at an encampment designed to defend a sacred mountain called Bear Butte, or Mato Paha to give it its Lakota name. Bear Butte sits at the northern edge of the Black Hills, where the hills give way to the high plains. It stands alone, a landmark to early travellers and a sacred place of worship to the Lakota, Cheyenne, Arapaho, and other Native American nations of the Great Plains.

Now, developers intent on a quick profit eye Bear Butte as a spectacular backdrop for giant party venues designed to serve the motorcycle rally centering in the nearby city of Sturgis, SD. Campgrounds and huge musical amphitheaters have begun going up, surrounding Bear Butte on three sides and destroying the peace, quiet, and beauty essential to a sacred place and a place of prayer. For a long time, the Lakota have pleaded with campground owners, civic officials, and motorcycle enthusiasts to respect their sacred site. When a bar owner and music promoter decided to call a new camping, party, and music complex “sacred ground”, the Lakota saw this as a clear insult. They decided to actively assert their right to pray at Bear Butte. Together with their allies, they have camped at the foot of Bear Butte, at a lodge owned by the Rosebud Sioux, and right next door to one of the biker bars and campgrounds. There they pray, bear witness, and there they will peacefully protest the desecration of this sacred place.

The Lakota have invited Christian Peacemaker Teams to accompany them in this work. Our roles include mobilizing the local Christian (and the wider) communities in defence of the right of the Lakota people to pray in peace.

Posted by Anonymous at 3:15 PM