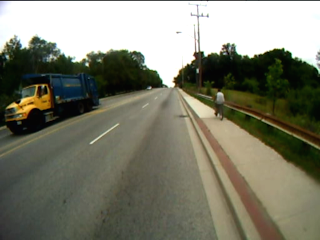 In the introduction to this series, I wrote that I believe cyclists have a moral obligation to the vulnerable users we share the roads with and to ourselves and the people we love: do no harm. Do not hurt or kill a pedestrian or another cyclist, and do not die on a ride if you can by any means avoid it. That means I have one top ethical and practical rule: do not ride on sidewalks. Riding on sidewalks endangers pedestrians, as two fatal collisions between sidewalk cyclists and pedestrians in Toronto over the past five years make tragically clear. But sidewalk cycling also endangers the cyclists who do it. Cyclists who come off the sidewalks at speed run a far greater risk of colliding with cars than cyclists on the road. Even a relatively slow cyclists moves at twice to three times the speed of the average pedestrian; motorists at intersections have to look farther or more frequently to see cyclists riding into the road. Not all motorists look far enough, and cyclists riding from the sidewalk to the street risk turning directly into the blind spot of a right turning driver. Over even a short ride, a sidewalk cyclist will ride through many intersections. It only takes one misjudgment with a single pedestrian, one driver failing to look far enough up the sidewalk, to turn a ride into a tragedy.

Don't do it. If the road frightens you, and Toronto has plenty of frightening roads, then find a safe route. Ride on a side street, through a park, on a shared use trail, use the bus to skip over a dangerous stretch of road. Riding on the sidewalk won't solve your problem.
Posted by John Spragge at 4:46 PM