One hundred and fifty years ago today... 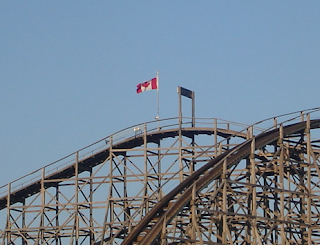 the parliament of Great Britain passed an act uniting New Brunswick, Nova Scotia, and Canada (then Ontario and Quebec), under a single federal parliament and four provincial legislatures. The new country, called a dominion in deference to the phrase from the Book of Psalms: "dominion from sea to sea" would continue to have the British monarch as a head of state, and British diplomats would speak for it in international relations, but Canada's own legislatures would govern in all internal matters. Canadians greeted the passage of the British North America Act with modest celebration.
One hundred years ago, the British Parliament had pulled Canada into the Great War without so much as a by-your-leave, and in the middle of a war Canadians didn't have the time or much inclination to celebrate anniversaries. In 1967, on the other hand, we did feel like celebrating. For one thing, we had achieved complete independence with the 1931 Statute of Westminster- think of it as the consent decree of independence for Canada, Australia, New Zealand, and South Africa. For another, it was the 1960s, an age of prosperity and a sense of liberation. The baby boom generation was coming of age. The country threw a major party, featuring Expo 67 in Montreal.

And so to today and the celebrations and fireworks of July 1, 2017. As I read comments on the events of today, I see some grumpy nostalgia for the spirit of expo67 of half a century ago, and a good deal of passionate anger from parts of the First Nations communities and their allies, saying from their perspective the past hundred years doesn't contain much to celebrate.

We can dismiss the nostalgia. We can't dismiss the anger. We don't know all the actual motives of the British Parliamentarians who passed the British North America Act, whether they wanted to make some profitable railway investments, wash their hands of a potential conflict with the United States, or give Canadians an opportunity to govern ourselves. What they did gave Canadians an opportunity to seek a better, more humane society. We have made some progress, but in many respects we have a lot to get done. If we don't take the opportunity on anniversary to dedicate ourselves to doing better, and in particular to making life better for First Nations people right now, we are missing the whole point of the events we light off fireworks to mark.
Posted by John Spragge at 11:59 PM